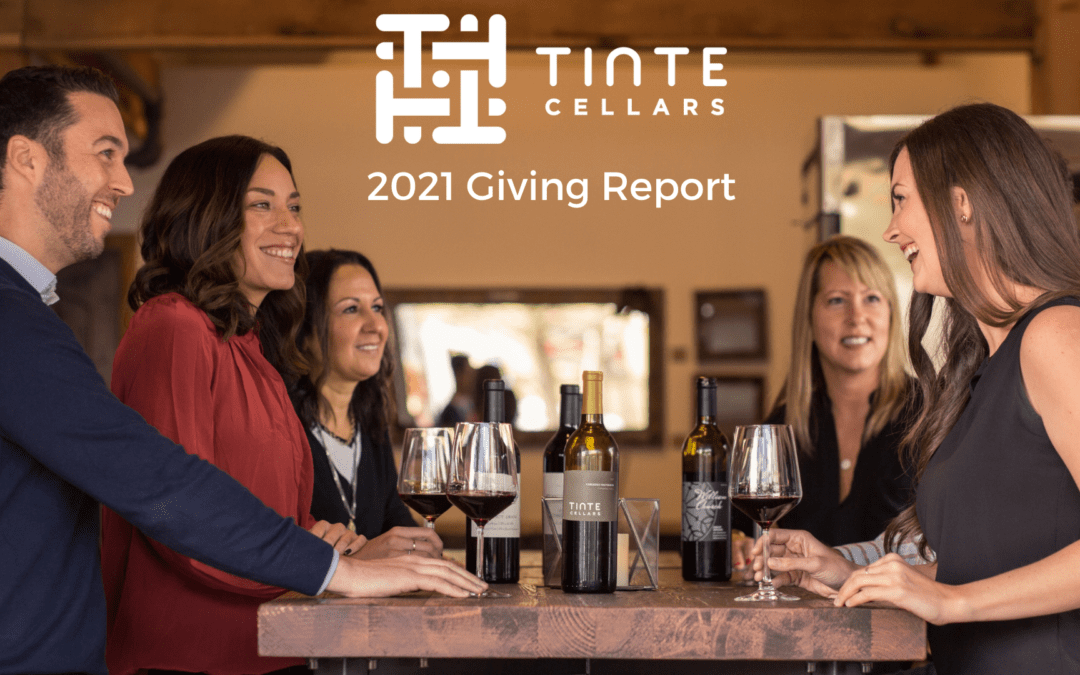 Tinte Cellars 2021 Giving Report
In the past three years, Tinte Cellars has propelled to the forefront of the Washington wine scene using a pioneering business model which balances philanthropy with the successful operation of a premium Washington State winery and Red Mountain estate vineyard. 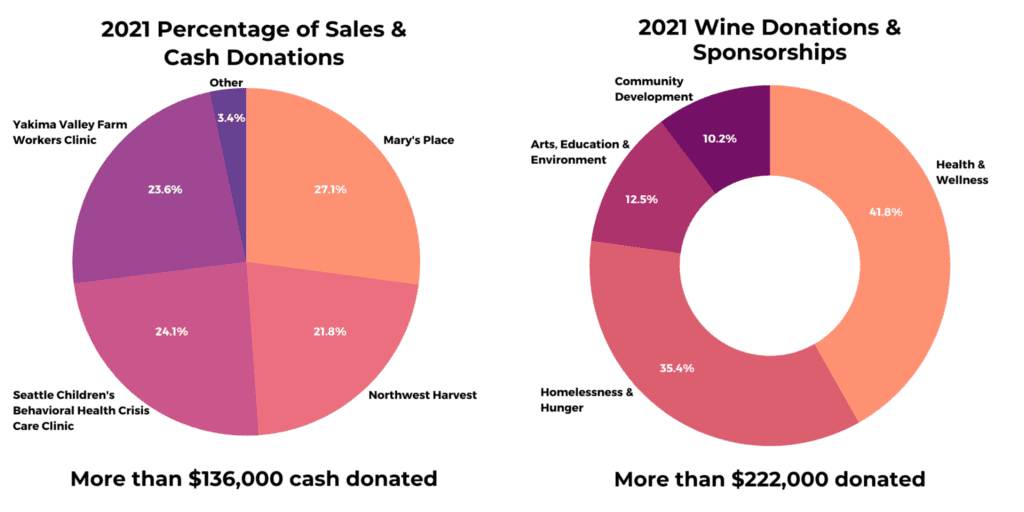 Giving Through Service
Tinte Cellars is committed to the synergistic impact of philanthropy and service within our community. In 2021 Tinte Cellars led by example through volunteer service projects, including collecting personal hygiene supplies for the Georgetown Tiny House Village; organizing a Valentine’s Day card effort for veterans at the VA Hospital; facilitating a food drive for Northwest Harvest with high school students; participating in a virtual fundraising walk benefiting the National Alliance on Mental Illness; hosting a cold-weather clothing collection for Mary’s Place; and taking donations at an on-air fundraiser for Seattle Children’s Hospital.

We are grateful to our community of Tinte Cellars wine club members, customers, and devoted staff of wine professionals who are instrumental in our philanthropic and service efforts. We are gratified to know we’re making an impact in the lives of those in need. Tinte Cellars: Great Wine for the Greater Good. 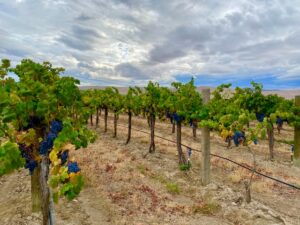 Located in the heart of the Red Mountain AVA immediately adjacent to highly regarded vineyards of Kiona, Ciel du Cheval, and Ambassador, among others, our new vineyard was expertly planted over two decades ago by Eve’s brother, the late Fred Artz, a legendary grape grower on Red Mountain who helped manage famed Klipsun Vineyard for more than 20 years. During Fred’s time there, Klipsun gained a reputation for quality on the world wine scene, was named one of the “Top 25 Vineyards in the World” by Wine & Spirits magazine and gained recognition as one of Washington’s “First Growth” vineyards in wine circles. Artz was held in high regard by the wine industry and received a Lifetime Achievement Award in 2009 by the Washington Association of Wine Grape Growers; he passed away in 2015.

Notable winemakers from both sides of the Cascades have produced award-winning wines from this vineyard’s fruit for decades. The new addition to Tinte Estates includes 12 acres shared by the three major Bordeaux varieties: Cabernet Sauvignon, Cabernet Franc and Merlot. Tinte Estates’ crop of wine grapes from its vineyards on Red Mountain will continue to be sold by contract as well as become featured in more award-winning wines produced by Tinte Cellars.

Vineyards don’t become available on Red Mountain very often and with nearly 60 percent of the region now under vines, there is very little space or opportunity for future plantings. Vineyards on Red Mountain have been sold in recent years to companies based in British Columbia, Napa Valley and Chicago. Tinte Estates is proud to secure this remarkable Red Mountain vineyard for our Washington State community of partners and employees. We are thrilled to continue to bring outstanding Red Mountain sourced and exclusive Washington produced wines to our valued club members and consumers.

Tinte Cellars does not have plans to open a tasting room on Red Mountain in the near future. We will introduce our wines and our mission at pop-ups and vineyard tastings throughout the year, as well as at our established Washington tasting room locations in Woodinville and Seattle’s Georgetown neighborhood. 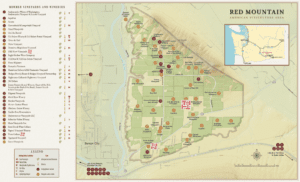 Considered by many in the wine industry to be the top grape producing region in Washington state, wines produced from grapes grown on Red Mountain have become some of the state’s most sought-after and have brought an international spotlight to the region. Red Mountain, Yakima and Walla Walla appellations are all contained within the Columbia Valley, which stretches from around Wapato to Milton-Freewater and crosses the Columbia River into Oregon. While the Red Mountain AVA lies within the southeastern area of the Yakima Valley Appellation’s boundaries, it has a distinct microclimate.

The small geographic region that comprises the Red Mountain AVA was formed by the repeated ice-age flooding of Glacial Lake Missoula over 10,000 years ago. The flood waters redesigned the landscape, configuring the soft mountain slopes and depositing nutrient rich topsoils over sand, silt, and gravel – as if to anticipate the introduction of wine grapes to the region.

Wines made from Red Mountain fruit express a unique terroir with exceptional color, strength, and richness, while demonstrating remarkable balance of fruit, acidity, and tannin.

The first Red Mountain winery was bonded in 1980. After that time, more people began to purchase land and plant vineyards, recognizing the superior quality of Red Mountain grapes and the potential for world-class wines.

AVA status was achieved in 2001. The Red Mountain AVA now hosts approximately fifty-four vineyards covering more than 2,300 acres, making Red Mountain one of the most densely planted AVAs with nearly 60% of the AVA currently planted.

The name Red Mountain can be misleading for two reasons. First, it does not refer to the color of the mountain’s soil, but rather, some say to a native grass with a red hue. Secondly, Red Mountain, for those with other mountains in mind, might be a disappointment, since its elevation ranges from only 500 to 1,500 feet. Even so, among the rolling hills of Eastern Washington’s desert, Red Mountain’s sloping hillside is a prominent landmark, storing radiant heat for the growing vines of the valley floor. The Yakima River flows nearby, helping moderate climate extremes, as do so many major rivers in wine country regions throughout the world. Some say the Red Mountain Appellation has it all: slope, exposure, weather conditions, good air drainage, large swings between day and night temperatures, multiple wineries within a few miles, plenty of undeveloped land, gravelly soil with high calcium carbonate content and high pH (high alkalinity). Sloping lands beneath the broad Red Mountain lie at the southeast end of the Yakima Valley, overlooking Benton City, where annual rainfall is only about six inches, and supplemental irrigation is usually provided a few months into the growing season. The world class wines made from Red Mountain fruit express the terroir with great strength and richness, while demonstrating exceptional balance of fruit, acidity, and tannin.